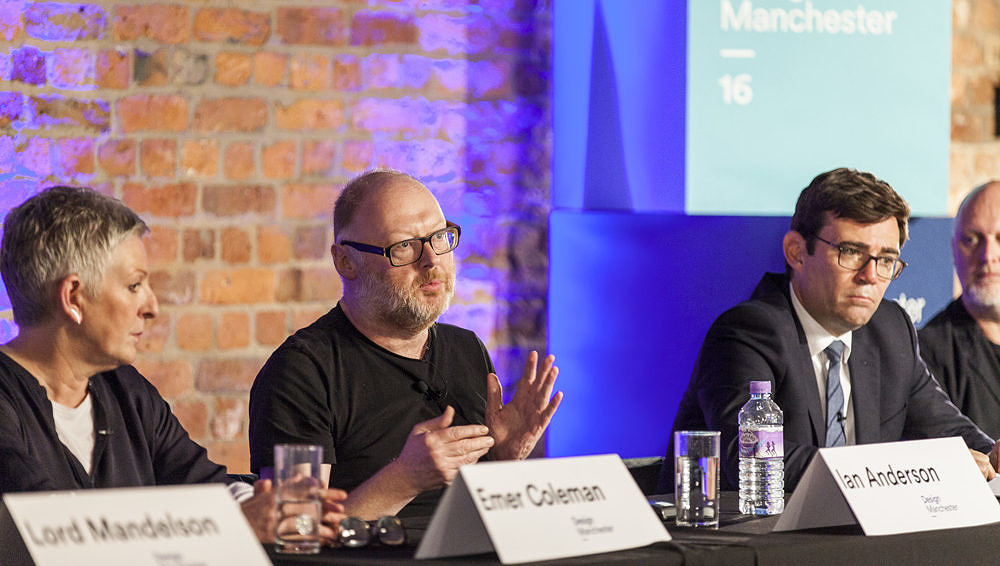 As Design Manchester came to an end last week, the festival was brought to a close in fitting style with their annual Great Debate.
The theme of this year’s festival, Design City, was reflected in the debate’s topic, “City Identity”. With the referendum result earlier this year the reality of Brexit and its impact on Manchester (and the development of cities everywhere) was a big part of the discussions.
To tackle these topics, the very best of Manchester’s creatives assembled at The Old Granada Studios, a venue steeped in Manchester history. On the panel was Sheffield-based star designer, Ian Anderson; Chancellor of Manchester Metropolitan University, Lord Mandelson; Technology Engagement at The Co-op and Director of TransportAPI, Emer Coleman; the front runner for Manchester’s mayoral election, Andy Burnham; Bristol-based creator of legible cities, Mike Rawlinson and urbanist and designer, Claire Mookerjee.  Chairing the event was magneticNorth’s Lou Cordwell.
Topics of the evening included city devolution and metropolitan mayors in the regions, how data changes our cities, how cities grow and of course the impact of Brexit.  But most importantly, it served as a great opportunity for the design community to discuss the role of design and the creative industries in our future cities.
The greatest outcomes of the discussions surrounded how the people make the cities. Mike Rawlinson suggested city identity relied on people and we should be creating cities around the citizen. He said, “We need to make the sum of our parts greater than the whole…to design cities around people is key as it is more benefiting for everyone.”
It was clear the panel believed digital and tech were the way forward. Lord Mandelson said, “What makes a city doesn’t come from branding or marketing, it comes from the people and the ability to enable its people to be what they want to be…which is chiefly driven by digitalisation. Digitalization will do for our generation what electricity did for others.” But the audience brought forward some good accompanying thoughts, that although tech and digital is what is pushing our cities forward, creativity needs to go hand in hand with that. Emer Coleman agreed, enthusing there should be “an integration of arts and creativity” with tech.
There was great anticipation for this sell out event and the striking venue of St John’s in OGS was a fitting backdrop to the discussions of the night, a building representing both Manchester’s past and future.  The audience helped push the flow of the debate into deeper discussions and really connected to the panel, with many nods of agreement from the audience and even a round of applause for Andy Burnham’s sign off, “If we don’t make this a time of change, when will we?”
Design Manchester has had an incredibly successful 2016 festival and the Great Debate reflected that. We are extremely proud to have sponsored the event and look forward to continuing our support for Design Manchester and the wider creative community.