In the latest in our series, My Life in Law, we speak to Associate Partner, Jonny Scholes, who has been with the firm since its inception on Valentine’s Day 2014, having worked at the previous incarnation of Pannone, joining as a paralegal in 2005. Having risen through the ranks to become a key member of the dispute resolution team, Jonny talks about his love affair with Pannone Corporate, the ‘speed date’ with partners which made him realise the firm was the one, his long-held ambition to be a professional rugby player, and his side-line in writing children’s picture books!

Tell us a little bit about when you joined Pannone Corporate?

I moved across as part of the management buy-out of the old Pannone LLP (with the remaining team joining Slater & Gordon). I started at the old Pannone as a paralegal for eight months or so in 2005. I’d been offered a training contract and arranged to do some work whilst I was waiting for it to begin. I started life in the travel team in personal injury, dealing with bulk claims involving sickness bugs abroad! I then had a few months off when I travelled across the West and East coasts of America with my brother, before starting my training contract in September 2006.

What did you do before joining?

My only other jobs before working at Pannone were working in my local pub – The Crown in Heaton Mersey – and working as a theatre porter at the Alexander Hospital in Cheadle. I enjoyed both jobs and they gave me some useful transferable skills, particularly in dealing with people, including some who could be a little nervous or wary and others who were a little more difficult! I also did a vacation scheme placement at the old Pannone too.

What’s your role at Pannone?

I’m currently an Associate Partner, having worked my way up through the ranks from my trainee days. I’m in the dispute resolution team and deal with general commercial litigation disputes, with a particular specialism in contentious trust and probate matters.

What drew you to Pannone?

I applied for a training contract with six Manchester firms. Pannone was one of them and stood out as being a full-service law firm, which was good for me as I didn’t know which area of law I wanted to specialise in at that time. In the end, it was the feel of the firm and the people that really attracted me. Pannone was the first of my second interviews for a training contract (a kind of ‘speed date the partners’ over lunch event, which sounds horrendous, but wasn’t too bad!) and I was offered a training contract.  I said I wanted to do a few more interviews before deciding, but after an assessment centre at a large Manchester firm, where it was clear to me the people weren’t as in tune with me as those at Pannone, I came outside, rang Pannone to accept their offer and cancelled my other interviews. I’m pleased to say it’s still the people that make the firm to this day.

What route did you go down, in terms of training and qualifications?

After my A-levels in English Literature, History and Politics, I didn’t want to do any of those as a degree on their own, so I opted for law, which encompassed elements of them all. However, I wasn’t actually planning on going into law as a profession at that time! I did my law degree at Oxford and then had a year out, where I was supposed to be playing rugby in France. Unfortunately, that didn’t work out due to a knee injury. In the end, I went back to Oxford and did a Masters in Criminology – in part to bide me some time to decide what I wanted to do for a career and also to try and get a rugby union blue (but an early season arm break put paid to that!). I applied for training contracts whilst doing my Masters and was offered one at Pannone just before I started my LPC back up in Manchester at Manchester Met. After that I did a stint as a paralegal at Pannone and then began my training contract.

Why did you choose this route?

I guess it was a case of finding my way as I went along. It just took me a bit of time to decide that being a solicitor was a decent fit for me. All in all, the slightly longer approach into the profession has probably made me more well-rounded.

What’s the most satisfying aspect of your job?

I enjoy working with people and particularly the people at Pannone. It’s nice to see more junior fee earners progress and grow in confidence. In a more, pure work capacity, I’m lucky that my contentious probate cases often give me an opportunity to make a real tangible difference to people’s lives, often in very sad or distressing circumstances for them. That can be very rewarding.

A typical day can often be hectic and is often changeable! My ‘to do’ list alters three or four times a day, most days. I’ll try and get some smaller jobs out of the way first thing and may need to set some time aside for a chunkier piece of work such as drafting a long letter of claim, or preparing instructions to counsel. There’ll normally be an element of supervision in there too: reviewing work done by junior lawyers in the team. Some of my time will be spent on business development issues and no doubt I’ll have a few phone calls and multiple emails in the day as well. Perhaps less frequently I may have a client meeting, conference with counsel, a mediation or even a court hearing and, if I’m lucky, the odd client lunch as well!

What are your career ambitions?

I’ve always had the philosophy of just getting my head down, working hard, and trying to be a good employee to have in the firm! By doing that I’ve always trusted that I would be rewarded at the right time with progression. Thankfully that’s tended to be the case and I’ve progressed each time I’ve felt ready to. Where I’m at now is a good place to be and if I keep on progressing as I am, then one day I’d hope to join the partnership.

If you were managing partner for the day, what’s the first thing you would do?

I’d look to set up some kind of fun team building event. Being from a sporting background (rugby), I think building team spirit is essential to a positive and productive environment and building relationships within the workplace only leads to a better culture and then better service delivery. I’d also allow everyone a Friday afternoon in the sun at Dukes (the pub) – also important for team building!

What would you be doing if you didn’t have a career in law?

If you’d asked me this when I was younger I’d have said a professional rugby player, but now with three children of my own, it would probably be some form of teaching, or writing children’s books! As it is, I’m limited to coaching the ‘Tiny Tacklers’ at my local rugby club, Burnage, on Sunday mornings in the rugby season.

What can lawyers / the legal profession do to better support clients? Does anything need to change?

The one thing I’ve learned to improve on over time, which I know clients appreciate, is the provision of information. Clients just want to know where things are up to and to be kept informed and updated. Clearly there will be times when you’re busy and you take longer to return pieces of work to clients. I’ll regularly try to send a few short emails at the end of a day if my timescales have slipped to let the client know. They’re generally okay with that and are grateful to be kept informed rather than having to chase. I think this is an area of client service a lot of solicitors can improve on.

Outside of work, what do you enjoy doing?

I lead a busy life with my wife Karen and our three children: Tessa (10), Tilly (7) and Toby (4). I love spending time with them and they’re a lot of fun, but it’s non-stop running around after them! Aside from that, spending time with our friends is also important to me, as is exercise. I’ve just finished playing rugby regularly with my club’s third team and am getting into CrossFit, cycling, and dabbling at golf! If you know anyone who could clone me to free up some more time to do all the above that’d be good! 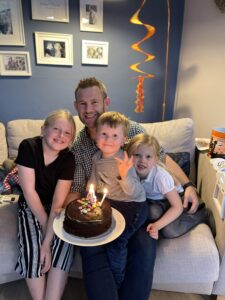 Do you have any particular skills/talents that your work colleagues may not know about?

I read a good bedtime story… and have also written a few children’s picture book texts over the years as a bit of a hobby, some examples being: ‘Nacho Newt and his Parachute’, ‘Flamingo Joe’, ‘The Gnome that Left Home’ and ‘When a Fisherman Caught an Astronaut’! I’ve not written any for a while though, so maybe I need to get back into it! Then I just need to find a good illustrator to bring them to life!

Where do you live?

I live in Heaton Chapel in South Manchester near Stockport. There are quite a few from the office who live in the Heatons and it’s a great place to live – only 10 minutes on the train to Manchester, close to the airport, lots of bars and restaurants, the Savoy cinema, my rugby club and a great community spirit!